Ducklings and Chicks and QUAIL OH MY! 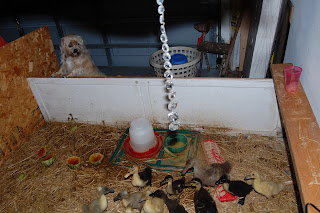 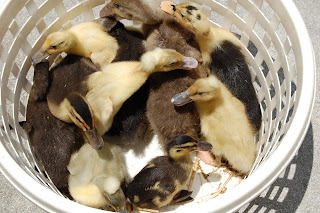 I never started out wanting chickens. As a matter of fact during my adulthood the thought had not entered my mind to raise ducks either, and a quail was no where in my thought patterns. Now as a child, a teen and even a new mom the thought living on a farm would be great. I had ducks and ponies and horses as a child so I thought for sure it was in my future.  But my husband (who was my high school sweetie) had been raised on a beef farm, next to his grandparents dairy and maple sugar farm and he wanted no part of going back to farming.

But when we bought our few acres and put the ponds on it I was mesmerised by the wild
ducks who came to visit. There was a problem though, they didn't stay. Then it hit me. I will get my own ducks. I raised them as a child but just to be safe I read everything I could on the subject. Ducklings are very very messy. I kept them in the garage in a pen made of scrap wood, cleaning it 3 times a day. Lots of straw a heat lamp in the corner. As they grew we made another pen outdoors but would bring them back to the garage in the evening, back and forth in a laundry basket until they outgrew it! 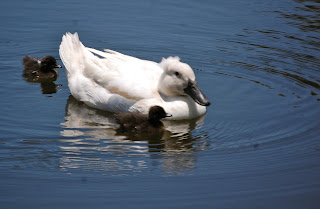 The ducks and I got along wonderful and amazingly enough my NON wanna-be farmer husband started to take ownership. The ducks flourished laying eggs for our breakfast and raising peeps of their own . We allowed them each to raise two families of ducklings a year, selling most of them. Then somehow we decided to get chicks and I was so amazed at how much cleaner they were. Well ducklings love the water and must have their little beaks in over their nostrils or I am told they will choke! 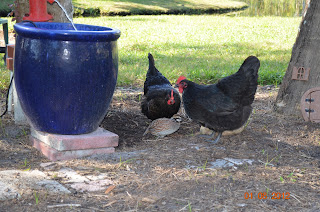 Hubby really enjoyed those chicks and one became so attached to him I named her Sugar Lips the Floozy. My grandson decided we needed bobwhite quail and gifted me with 4 young ones.
Three escaped never to be heard from again.
So now we have Henry the quail whose wonderful tale of life will be saved for another time where he can be the star of the story as he is at my home,,,, scampering with his feathered family of Diversity.
Posted by blondeponder at 8:53 PM No comments: