Phase one of our ponding Experience(disaster) 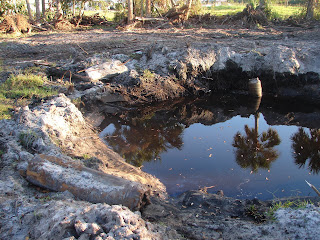 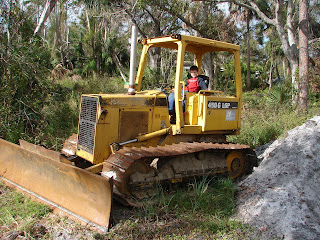 The water and wind that a hurricane can inflict on a piece of property can only be described as a nightmare. But in this case it gave me a look into the possibilities ahead. Water surrounded the low lying areas making it look as though we owned water front property. So the thought occurred to me , why not? Instead of bringing in fill to replace giant holes where the root systems of large trees had once been we decide to find someone who could dig ponds, using that soil to make our existing land higher and give us great water features. I had drawn out a plans for the ponds connected by a winding creek and of course, gardens.
Two of my children thought it would be perfect place for both of their upcoming weddings the following year.
The first problem would be finding someone up to the task. The man we wanted and trusted had been injured in a roofing accident thanks to Hurricane Francis and Jeanne. We spotted a sign advertising ponds in a pasture with a nice pond and called thenumber. We got an immediiate response and met with the man. He was a young BUCK who sold us on how GREAT he was at moving dirt and making ponds. Buck (not his real name) drove us around in his FANCY pick up to see other lovely ponds that he insisted he had built. We had no reason not to believe him, but we should have .
He began by bringing heavy equipment on the property and piling GIANT mounds of debris up. The piles and the equipment seemed to just sit there. That Christmas I teased my husband that I was going to add lights and decorations to the BIG yellow Caterpillar dirt movers in the front yard. He assured me that the wait and all the mess would be worth it. If I questioned the man
as to when I might see progress his answer was always that it was ALMOST finished. I had been anxious to start adding flower beds but he kept tearing up areas and never finishing them. I asked for at least one corner of my two and a half acre property to be finished but he never could accomplish even that. Time wore on and when I prodded my husband to force Buck to get moving he insisted we give him more money for another piece of equipment. It was coming on a year that my two and a half acres had been turned into a messy, muddy junkpile. I had no grassy areas for my dogs to run in so all that mud eneded up in the carpet.
I noticed that Buck would he would disappear for months.
Becoming totally aggravated and with the realization that NO weddings would be possible and we would now be footing the bill for Country Clubs I asked my husband to fire him. He talked to the guy and lo and behold he delivered an EMPTY flatbed trailer to sit in my front yard. Then.
as usual he disappeared.
I do not anger easily but I was IRATE, "How stupid does he think I am?"I told my husband." He obviously only knows about tearing things up!He has GOT to go!"
My husband decided to try to get some of our money back and that is when the real fun began. People we knew began to tell us how much he owed THEM or their friends. The cashier at the bank could only shake her head in disbelief when my husband tried to cash the worthless check Buck had written. My husband who tends to be overly naive FINALLY caught on and headed to the sheriff. The man would be arrested if he didn't make good on the check.
Buck, being the shmoozer that he was convinced someone who took pity on him to pay us some of our money so he would not have to go to jail. The good thing is that eventually, he did end up in jail. Not because of what he did to us but because of stealing cattle. Luckily the county he did that in still had some tough cattle rustling laws! By this time our first choice dirt mover we wanted to build the ponds had recovered from his injury and now we needed to if see if he could help us deal with the mess we had.
Posted by blondeponder at 9:31 AM