The Fence that made good neighbors,,,sort of. 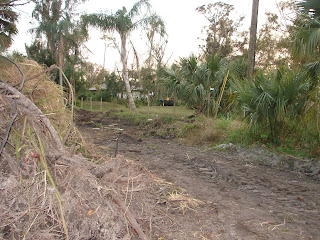 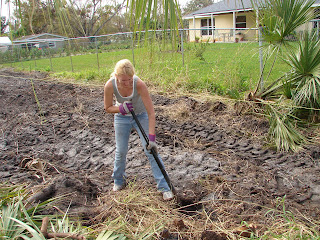 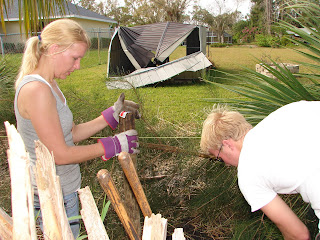 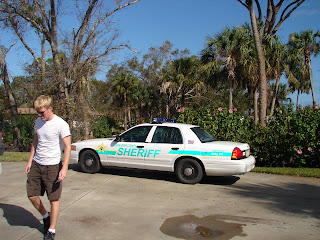 We had planned from the beginning to fence our property so we discovered not only do we need a permit but that they would be inspecting the fence also. I am sure every county has rules as did ours. After discussing it with a plant and wildlife enthusiast friend of mine she convinced us to make sure it was wildlife friendly. That meaning bugs bunny and turtles would be able to pass through. At the time I thought that was the way to go so I convinced hubby and we went with Hog wire fence with about 4"X4" squares.
The neighbor behind us had been warned that we would be putting up a fence when I noticed after the survey that he had been planting things on our property. He actually got angry saying that he had used that property for years! Well, the folks we bought it from had not spent any time in the back of the property and there were alot of trees sheilding their view. I tried to be nice saying, just come over and dig your plants up before the fence goes up.
Time went by and he did not do a thing. We would have started the fence sooner if the first pond guy had gotten the work done but we had to wait for the area to be cleared of invasive Australian Pine trees.
Finally the day for clearing the soon to be fence line was approaching and he spotted our workers on his hour home from lunch. He became irate screaming at me again that he had used this property all these years. I mentioned that the purpose of a survey was to see where your land was and that I had warned him we would be putting up a fence. I mentioned that we paid dearly for this property and we intended on using every inchAt that he began ordering
my landscape man around telling him to dig up his trees and plants and put them on HIS property." WHOA," I said. " I am NOT paying him to do your work nor will I let him go on your property because if anything goes wrong you will sue us!"
At that we began to make plans to rush the fence and start it in the morning with one son and our daughter to help us.
The next morning we had all the fencing and tools and headed to the back of the property to at least get the dividing line between our property and his in. But as we began work we discovered he had rented a big tractor of his own and was digging the plants and scooping out soil from the yard. My husband asked him several times to stop. He asked him to please quit taking our soil.The neighbor with his powerful tractor smiled and said,"Make me!'
That is all it took for me and the NON emergency Police number was called.
Posted by blondeponder at 12:31 PM